How FECs can benefit from virtual reality

With Ready Player One recently released in theaters, we’re placing bets that a ton of people are wondering how they can get a taste of virtual reality. They might want to start their search at family entertainment centers, also known as FECs, which have been around for many years but have recently been booming along with other forms of location based entertainment.

FECs are commonly known for mini golf and hoarding game tickets, but more of these locations are turning towards VR. Wanting to dive deeper into this trend, we spoke with members of the SpringboardVR team to take a look at why FECs want to get into VR and how we can help them achieve that goal.

Here’s an example of an FEC:

Plain and simple, VR provides tons of fun in a small amount of space, something we know is a huge priority for LBE.

Laser tag, trampolines, and kart racing have earned their spot as tried-and-true staples of FECs, but take up a lot of square footage. Especially for facilities that don’t have the real estate, VR can provide similar experiences that are just as engaging and immersive.

For example, some VR titles provide the same thrill as laser tag but take up a fraction of the space as an arena, which is built to stay that way for years.

Installing VR allows FEC owners to “diversify or die,” as stated by Bryan Severance, Head of Turnkey Operations for SpringboardVR. “If [FECs] don’t take care of themselves by constantly being new and being fresh, they’re gonna have a hard time.”

With the virtually unlimited amount of entertainment it can provide, it’s easy to see why VR is an attractive choice for FECs, but it’s important to look at the hurdles that can be expected along the way. 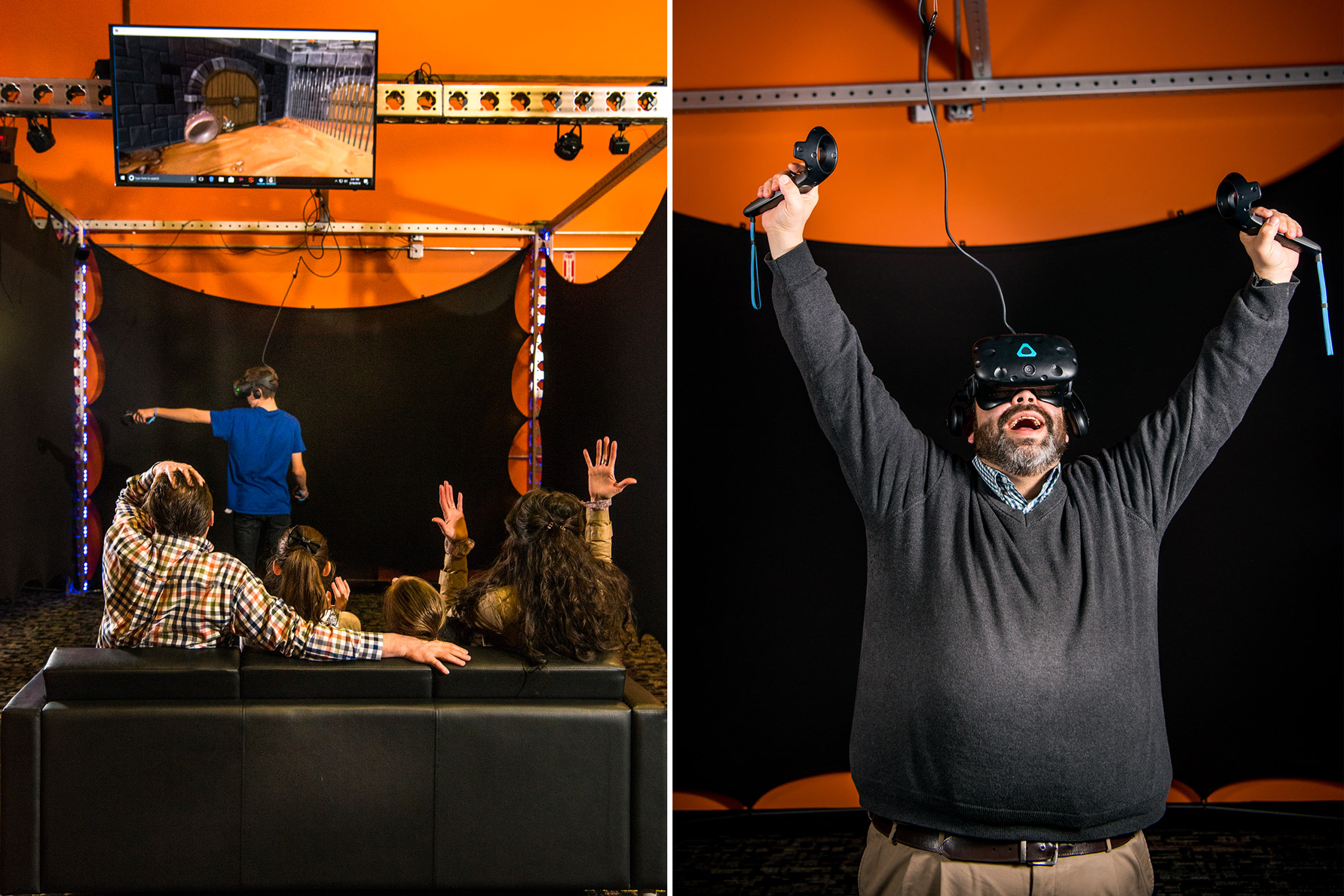 Whether you’re an FEC or an aspiring Wade Watts, putting the money down on VR hardware is a weighty choice. There is so much that goes into setting up a VR arcade that most people might not know is important. Severance was able to provide an extensive list of recommended equipment, including controller charging stations, face guards, and sanitary wipes.

The construction of the VR booth is also commonly overlooked, as the flooring and walls help protect both players and equipment.

Seeing how crucial the selection of hardware can be, our turnkey options help make the entire process less daunting. We’ll look at a client’s budget, what they’re looking to accomplish, and how often they want to upgrade their system. Williams adds that the procurement of any recommended items can also be taken care of, which we all know can be a hassle.

As Severance states, SpringboardVR is the “least expensive option out there yet most customizable. We will customize to the client’s specifications and what their needs are.”

The list of VR titles is constantly growing, which is both exciting yet intimidating. Deciding what software to try can be difficult, especially for FECs.

With traditional arcade machines, players know exactly what they’re getting into, but with VR, one machine can play multiple titles.

This is great for the versatility, but can keep players constantly browsing if they have too much to choose from. Williams recommend 10–15 games to start off with, keeping in mind that titles can be switched out depending on their popularity with players.

Additionally, Severance mentions that SpringboardVR likes to keep an eye on the top 20 VR titles in a given month, as well as provide editor picks.

When it comes to the actual selection of those titles, our Marketplace is a powerful and affordable tool, eliminating the frustration of coming up with agreements for titles individually and providing low licensing charges. With over 150 titles to choose from, the ability to only pay for what is played, and other great features, the SpringboardVR Marketplace makes software selection very easy for FECs interested in VR.

Deciding how many stations to install can be tough, since you neither want to have too few nor too many.

Williams says 6–10 stations is a good recommendation for those unsure, but ultimately it depends on how much space the FEC has to work with.

Severance stresses the importance of building for the weekends, as those tend to be when VR stations are in demand the most. With this in consideration, he recommends at least eight stations.

Staffing is another big factor, since a dedicated operator will need to oversee those stations.

One employee can manage up to 10 stations with our station management tool, or three to five employees without.

An upcoming feature Severance was excited to talk about will allow employees to assist players in booths via microphone whenever help is requested, giving players more time to play. With features such as this, servicing multiple VR stations becomes a much easier task to manage.

If one of our upcoming features is any indication, VR experiences are about to get much more exciting.

VR users want more opportunities to interact with one another in virtual worlds, and Williams was excited to mention that we’re working on a way to allow customers to join or host multiplayer games with other participants in an FEC.

Players would even be able to connect with those in different FECs via the SpringboardVR network. Ready Player One’s OASIS seems like a far-off dream, but we seem to be getting closer day after day.

Setting up a VR arcade can be intimidating, but with the potential for increased revenue, the technology becoming more accessible, and tools like SpringboardVR to help make the whole process easier, hopefully we’ll be seeing more FECs embrace VR as a viable addition to their facility.

Interested in learning more about how VR can benefit FECs?
Contact us here and we would love to get the conversation started!