We wrote this blog because we saw that VR Arcade owners across the globe are struggling to optimize the use of Base Stations––and we want to help. In this blog, we’ll cover Base Station basics, the do’s, and the don’ts.

What is a VR Base Station?

A base station is HTC Vive’s communication beacon. Base Stations power the presence and immersion of room-scale virtual reality by helping the Vive headset and controllers track their exact locations. According to XinReality,

“Base Stations perform this function by constantly flooding the room with a non-visible light. The receptors on the tracked devices would intercept the light and figure out where they are in relation to the Base Stations.”

Why are Base Stations important?

Base Stations facilitate the VR experience entirely. They are the proxy in between the computer, the peripherals, and the user. Keep in mind:

These three peripherals are needed to achieve presence (definition and more info here), but if there is a disconnect between the customers’ game play decisions and the Base Station output, there will inevitably be issues in Base Station tracking and confusion for the user––aka a shoddy customer experience.

How can Base Stations make-or-break VR Arcades?

“The bane of all VR Arcade operator’s existence. When you’re setting up multiple units in your space, make sure that there’s no leakage between the Base Stations because nobody wants customers’ headsets graying out or flying sideways––which often leads to vertigo.”

“When we first opened our arcade we anticipated having technical difficulties with this new technology. We also knew we could troubleshoot and iron out these issues. What we never could have anticipated was the overwhelming and consistent tracking issues we would face in running 5 HTC Vive  base station setups in such close proximity to each other.


Through time, testing, theories and willpower, we managed to eliminate a lot of issues we were facing, including regular headset tracking issues and complete loss of base stations altogether. One of our units, however, absolutely refused to be fixed. We tested every possible variable that could be affecting it; light, infrared, reflections, power, angle, height, hardware, settings… we basically used this VR Pod as a Patient Zero testing ground for every possible theory as to why we weren’t achieving 100% smooth tracking.


During this testing we noticed one thing; when the lights to the arcade were turned off, the headset IMMEDIATELY worked perfectly. The snap of the lightswitch was like a trigger to activate/kill VR tracking. But only in one pod. Our problem pod. So we tested the pod after sealing it from all external light sources and sure enough it continued to not work. It was as if the switch itself was the problem, not the light.


One day a customer came in and in-passing I happened to mention the problem pod. Our black sheep. He mentioned that he is an electrical engineer and asked – out of curiosity – what our problems were. After the quick explanation this man didn’t miss a beat, he immediately stated with complete confidence “An electromagnetic field. It’s the data cables and the power cables, they’re too close to each other in the wall and so your sensors are being heavily affected by that.”


Since we moved our arcade to a new location we have never had an issue as bad as that. I do feel bad for all the people who are having unknown, nail-biting, hair-pulling VR tracking issues because of uncontrollable environmental elements… especially those with an arcade!”

The success of VR Arcades relies heavily upon, if not wholly, on the customers’ experience. By providing more opportunities for heightened levels of immersion and presence for your customers, your VR Arcade will be set up to succeed and thrive. Setting up your Base Stations correctly is your starting point.

Note: The solutions proposed and illustrated in this blog are non-standard setups for the Vive. When possible, the Vive needs to be able to see a lighthouse (Base Station) at all times––the opposite corners configuration helps ensure that.

SETTING UP VIVE BASE STATIONS - THE FACTS

FACT: Two Base Stations can be used to communicate with two headsets. (Mind blown, right?!) 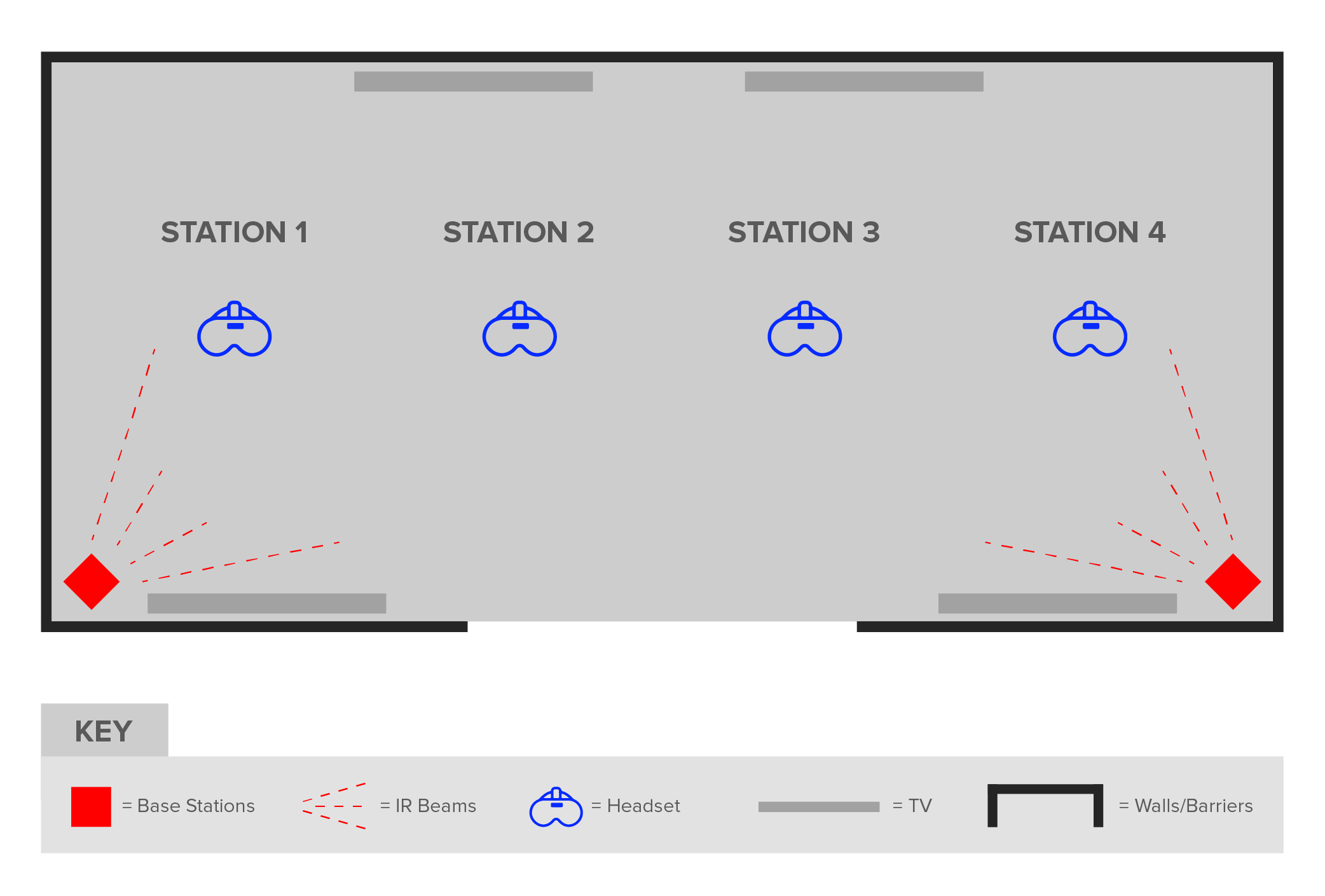 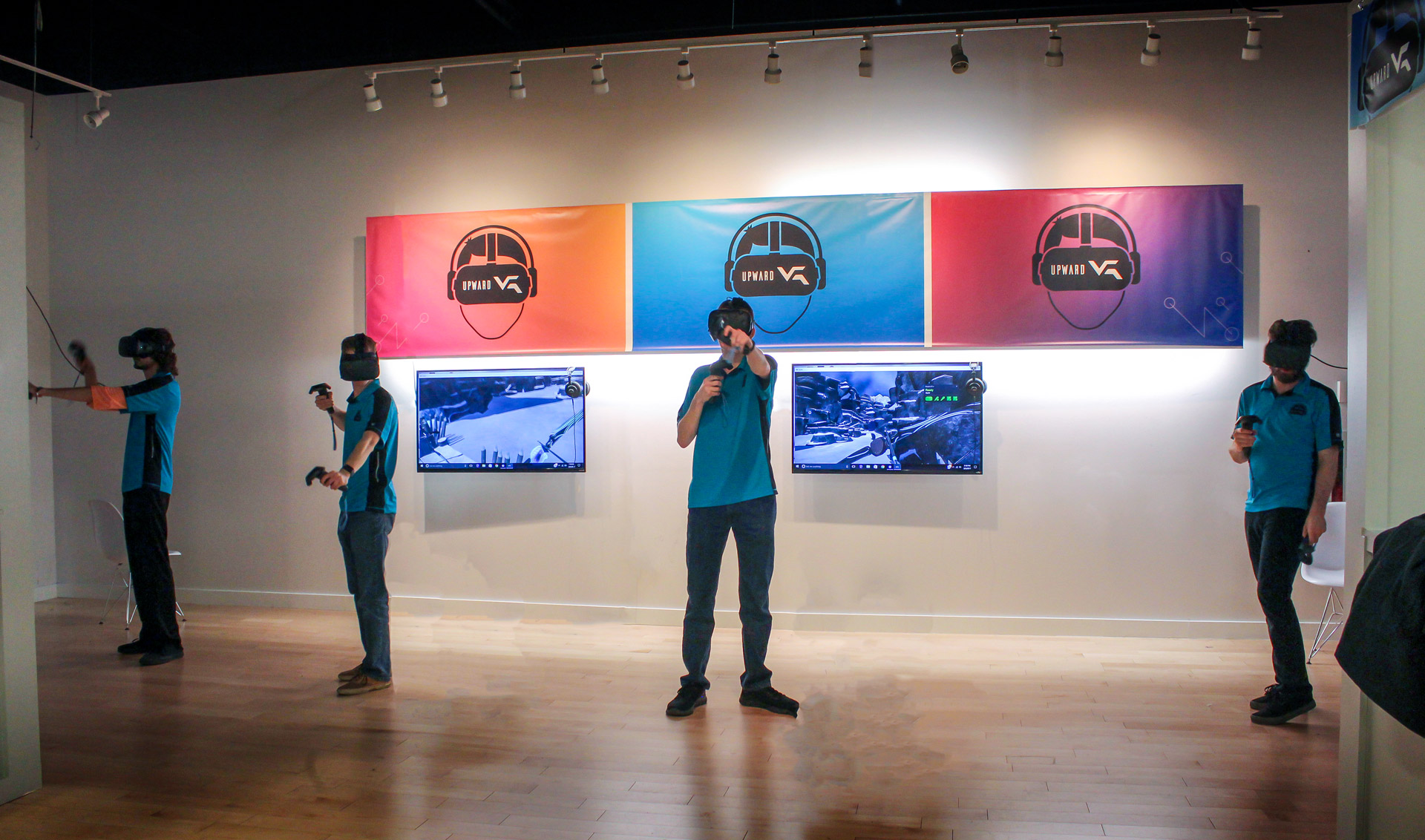 FACT: Base Stations can be set up wirelessly, or they can be hardwired. The difference is in connection authenticity and channel setup.

FACT: IR beam interference will inevitably become an issue if your Base Station setup locations are incorrect.

DO: Hardwire your base stations when possible. It provides a more reliable connection by transmitting and communicating through channels A and B, instead of B and C.

DO: Segregate your game stations with a wall, booth, or signage. This will help with IR beam interference by providing increased blockage in between each station’s Base Stations––ensuring proper tracking of the headset. See station mockup below: 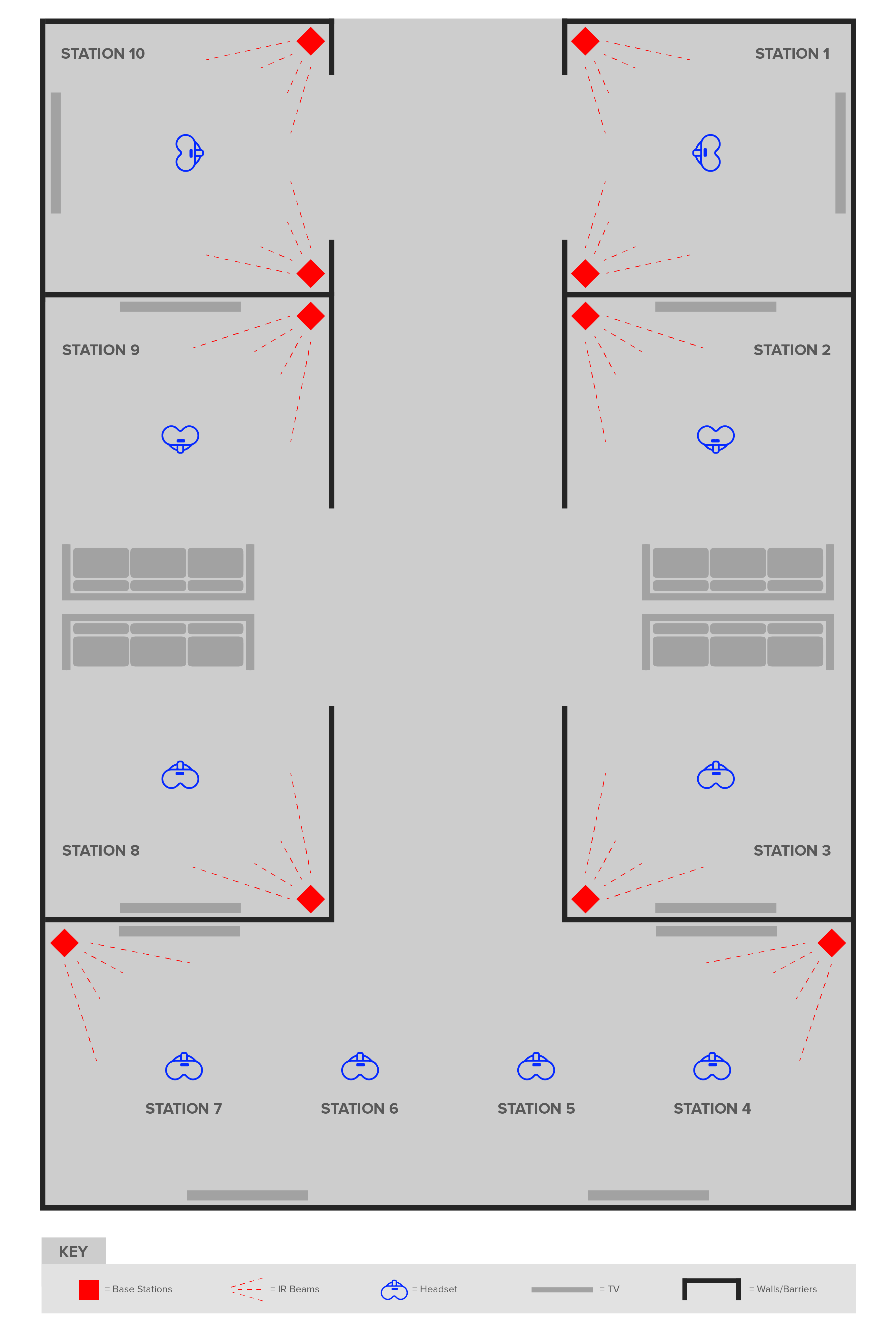 DO: Test out the responsiveness during initial setup. There should be no lagging or jitters.

DON’T: Assume you need two Base Stations per headset to properly track the user. Two Base Stations, setup correctly, can track more than one headset.

DON’T: Regularly move/adjust your Base Stations. Once placed in the correct location, try to ensure they stay as stationary as possible.

DON’T: Place your base stations outward, or in a trajectory that can cause interference with your other stations. Do your best to place them facing inward, instead. See example station mockup below: 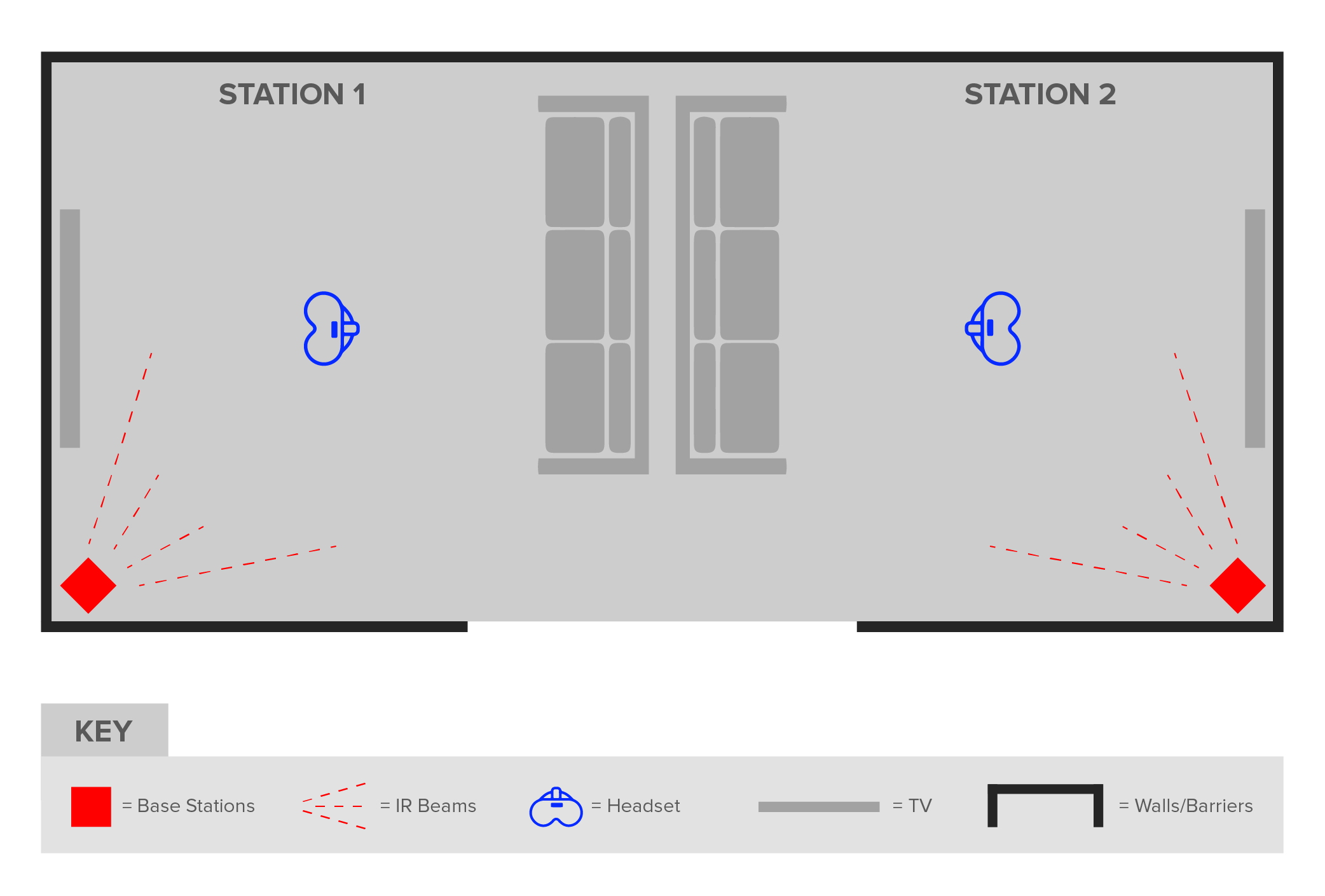 With SpringboardVR, your customers are set up from the beginning of their experience to achieve higher levels of immersion and presence. Learn more and/or start your free trial today!