Zombie Training Simulator Checks all the Boxes for Location-Based VR

There are many factors that go into running a successful VR Arcade, and offering premium content is certainly near the top of the list. It is very important an Arcade owner is familiar with their library, and have a carefully curated library of high-end VR experiences to have a successful VR Arcade. We sat down with Bryan Duke of Acceleroto to discuss their VR title, Zombie Training Simulator, to learn how they created a high-end game that has all the features and nuances to fare well in the out-of-home VR space.

Side note: Brad Scoggin, our Co-Founder and CEO, first tried virtual reality back in October of 2016, which sparked his passion to open one of the first VR Arcades in North America — and eventually create SpringboardVR. That very first game he played? You guessed it, Zombie Training Simulator!

Available November 1st, Zombie Training Simulator will be priced at 0 cents per minute! Starting December 1st, the price per minute will increase to 6 cents.

Can you tell us about Zombie Training Simulator, and why you believe it is a great title for location-based VR?

“Zombie Training Simulator (ZTS) is super fun and players love going back for “one more game.” It’s a first person VR gallery-style shooter set in a cartoon low-poly world. You have your pick of a big pile of weapons from pistols to dual-wielded automatic rifles to gas cans & propane tanks you can blow up. With your guns, the zombies are tough little cardboard cutouts — it’s headshots or go home. The non-gory graphics and feel throughout the game make it super approachable and fun for everyone. It’s designed to be a fair yet intensely challenging game. Most people laugh & scream while they play. It’s great when played solo and it’s fun to watch too, so it’s an awesome all-around party or arcade game.”

What makes the game/experience specifically good for location-based entertainment?

“It’s an approachable, family-friendly intuitive shooter with a wide variety of weapons and gameplay modes. When we started work on this game, we knew that VR titles could be insanely intense. Before VR headsets were generally available to the public, we did tests on different graphic styles and found that realistic graphics can be too much for many players to deal with. Good VR headsets are amazing — Even in a cartoon VR world, your brain can still think it’s real. To open Zombie Training Simulator up to a wide audience, we set it in a forgiving-looking world. Still, when you’re playing it’s incredibly immersive. Playing Zombie Training Simulator almost feels like a bungee jump adrenaline rush. It’ll get your heart pumping and you’ll do everything you can not to get killed by a zombie (yeah, even though the zombies are cardboard cutouts). When it’s over, the fun is just right to want to keep going.”

What was the inspiration behind the game/experience?

“Zombie Training Simulator was the VR game that we wanted to play. Everyone on the team has been around long enough to have dropped lots of quarters into arcade machines back in the day. Mixing the feel of some of those old games with the new & engaging tech of VR felt perfect to us.”

How long is the game/experience? Does it play through in one sitting or are there multiple levels, or chapters?

“ZTS can be both a long and short experience. We designed it to be easy to pick up for just a quick few games while also challenging players with long zombie shooting runs. It’s designed with a great spread of different game modes, levels and weapons. A single game can last just a few minutes in a zombie bowling match with machine guns. A player with mad skills can play for half an hour or more in the survival levels. For most players, the survival levels are where to start. Those levels start out easy and continually ramp up in difficulty to make even the best player sweat.” 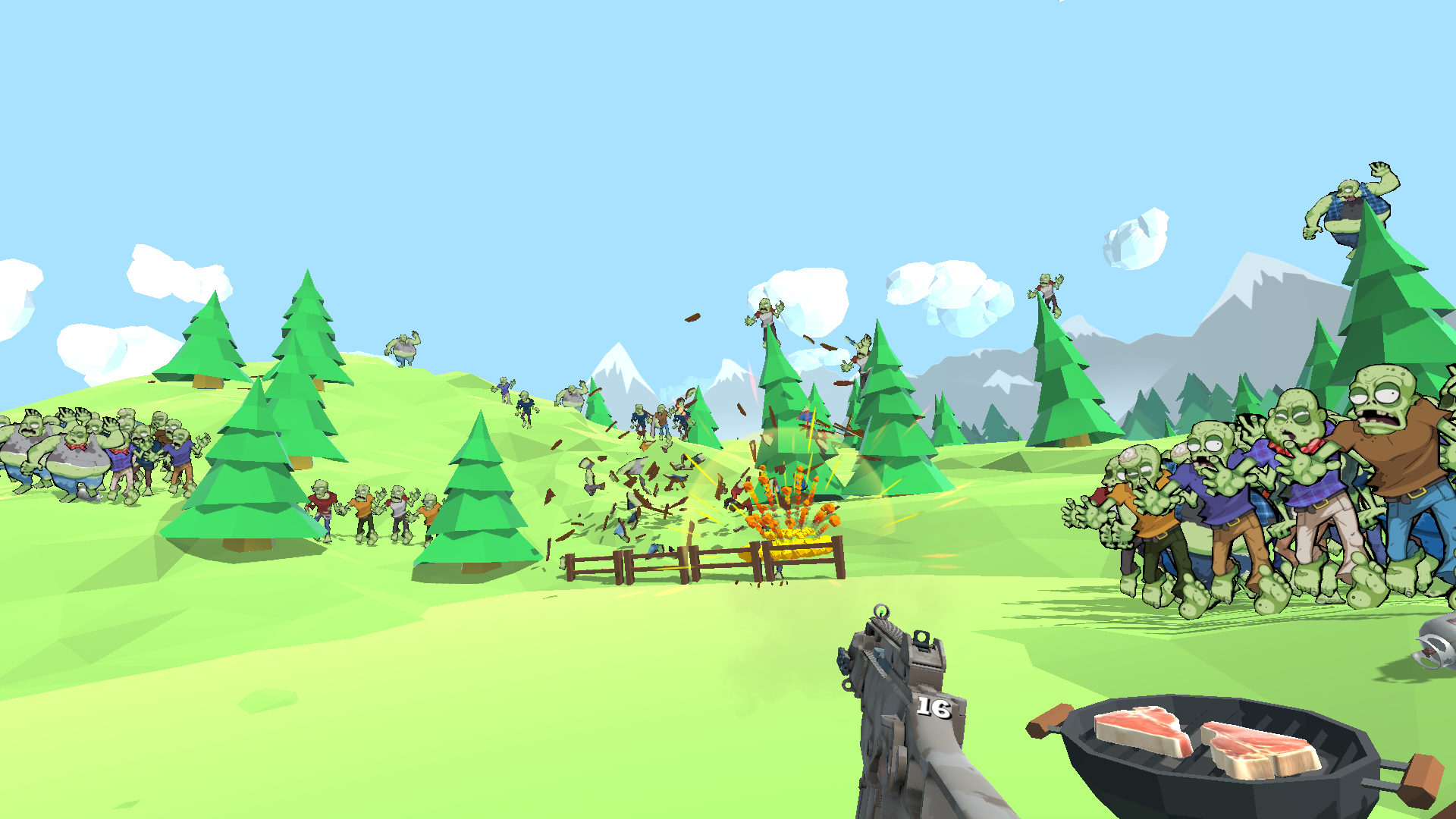 What would you tell an arcade owner is the game’s #1 selling point?

“Everyone loves Zombie Training Simulator. Even my non-gamer wife loves it and introduces it to her non-gamer friends. New players have a lot of fun exploring VR and seasoned players are still challenged to their core. There’s lots of fun for everyone in ZTS.”

Do you have any tips or tricks the player should know?

“SHOOT STUFF! Look at the table & grab your favorite weapon. The menus are all shooting-based, so just shoot at what you want to do. If you want to go back to the main menu (aka the safe house), look at the back right of the table for your safe house target. The most fun thing for many players to discover is that you always have two katana swords ready for close-quarters melee. Just reach over your shoulder, grab a katana in either hand (or both!) and slice away!”

Do you have any special set up requirements or tips for the operator?

“For the launch on SpringboardVR, we’re introducing a new arcade-only build of Zombie Training Simulator that should do all the setup for you. It will have all the weapons & levels unlocked and will disable the user controller-triggered menus. It should be as simple as install — play.

One thing to maybe watch out for is there is enough shooting to do in the main menu area by the safe house that some people will just stay there and shoot zombies from a safe distance. Make sure players actually play the game!”

What makes the player want to play it or watch it again?

“Zombie Training Simulator gets your heart pumping. Like I mentioned before, we designed the game to be completely fair and easy to learn. If you die, it’s always your fault. It’s really challenging though. The mix of levels, modes and weapons along with the immersive challenge of the game give players plenty to keep coming back for. It definitely has that “one more game” feel.” 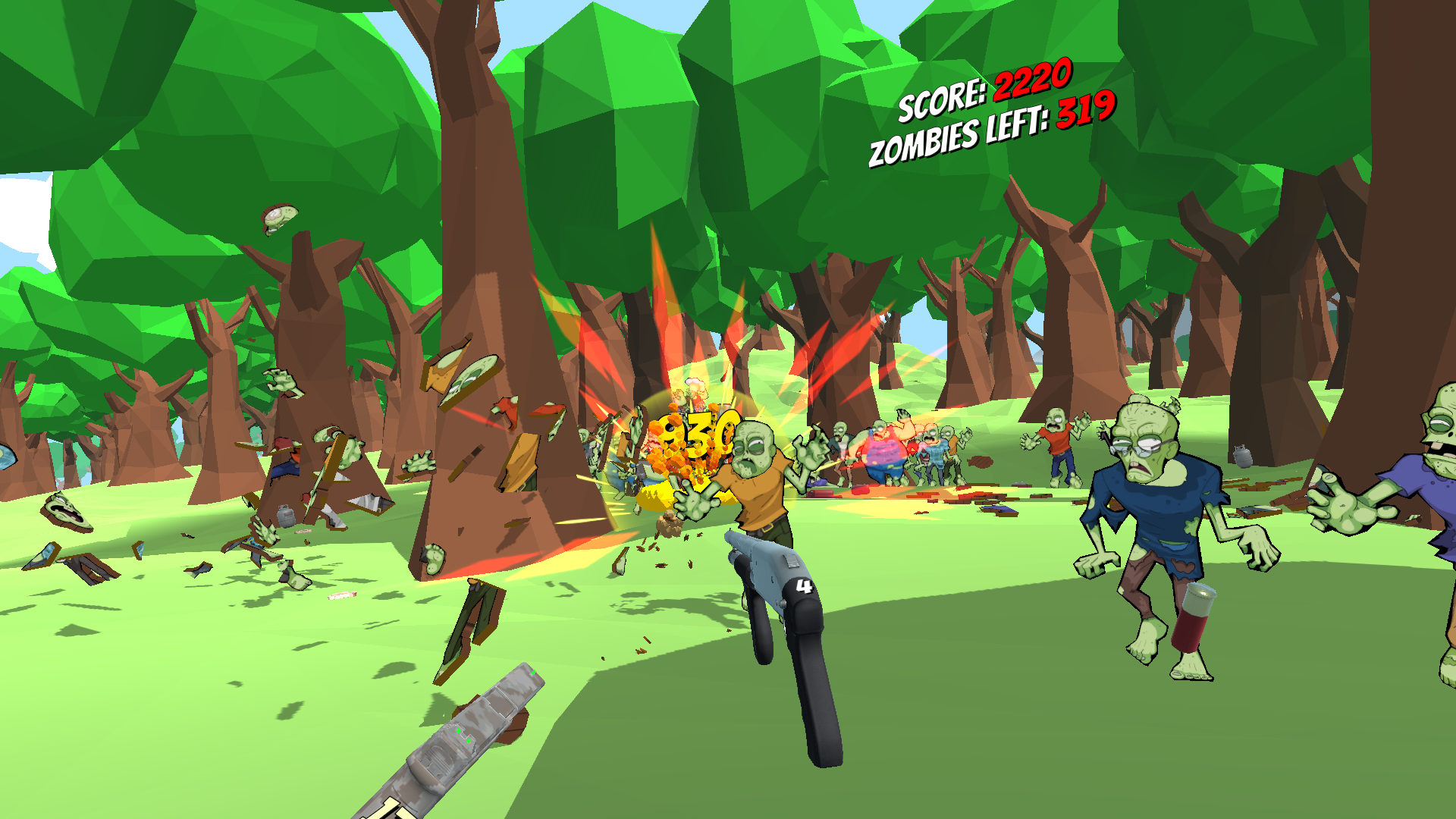 What mechanics/storylines/etc makes your game a blast?

What is YOUR favorite thing about this game or experience?

“If I had to pick a single favorite tactic in ZTS, it’d be propane tank throwing. It’s wildly fun to pick up a propane tank, throw it over your head toward a mob of deadly zombies then shoot it in the air right over their heads. BOOM! Zombie parts go everywhere.”

Did you learn anything from working on other VR titles?

“You know, we try to learn from everything we do and also from the titles that others put out. VR is a rapidly growing space with tons of creativity right now. It’s a really fun time to work in games.”

What is your team’s background?

“ZTS was created by a small team of indie developers, artists and musicians with backgrounds covering both AAA and indie games. We’re all gamers who love new tech.”

Did anything funny happen on the way to publishing the title?

“Oh yeah. Early on in our testing, I did a jumping propane tank throw in the game. In the real world, I jumped and swung high enough to hit the ceiling fan in my office. I didn’t have the wrist strap on, so the controller got ripped out of my hand… and went flying across the room then bounced out the door and down the stairs. Another time before then I did a side toss of a grenade in the game and hit my computer monitor with the controller. My cat jumped up from my desk and ran out of the office at nearly light speed. Don’t do that.”

What kind of feedback would you want to get from an operator?

“First, I’d love to hear about any problems they have. We try our best to get great software out for everyone, but if we miss a problem we may need your help to learn about it. Second, it’s always great to hear about the good things too. I got a report back from one arcade owner about Zombie Training Simulator being a giant hit at the Minnesota State Fair with something like eleventy billion players trying it out. (OK it wasn’t that many, but it was great to hear about the happy arcade owner and all the happy players.)”

What do you want the end user in an arcade to come away thinking?

Add Zombie Training Simulator to your VR Arcade library today! Now priced at 0 cents per minute for the month of November!